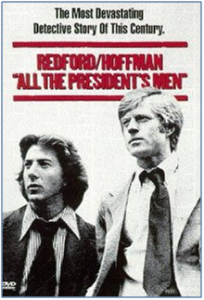 The 1976 drama-documentary movie All the President’s Men which starred actors Dustin Hoffman and Robert Redford, uncover the details of the Watergate scandal that leads to President Nixon’s resignation.

While researching a story about a botched 1972 burglary of Democratic Party headquarters at the Watergate apartment complex, green Washington Post reporters/rivals Woodward (Robert Redford) and Bernstein (Dustin Hoffman) stumble on a possible connection between the burglars and a White House staffer. Woodward and Bernstein follow the money all the way to the top of the Nixon administration.

In B2B sales we have to follow the money trail as well. A key definer is to ensure the prospect has the budget to afford what you are selling – or there is little point in approaching them in the first place.

It is important to understand where your customers derive their income from and when.

Local councils have a variety of sources of income. It is important to be aware when Councils have access to these funds so you know when they have the funds to buy.

Much of a council’s income comes from land and building rates. Each year, owners of property – including houses, farms and businesses – must pay rates to the council. Generally council rates are paid quarterly in February, May, August and November.

Another way local councils collect money is by charging a fee for their services. Usually, the charges will be used to pay for these services. Income for councils is also derived from dog license registrations, and fines paid to councils when people break council law. Councils also receive money from the state or federal government in the form of grants and subsidies.

Both government and private schools generally work to the standard June to July financial year. Term 2 is from 28th April to 4thJul. Generally it is good practice to target schools at least twice per term. The first campaign should go out at the beginning of week two and the second during mid term.

Schools acquire funds through school fetes, P&C, fund raisers and student fees in the case of private and catholic schools – as do early learning facilities .